The Marvelous and Mysterious Matsutake

Hunting the mystical matsutake each fall in the Oregon dunes has becoming a tradition for us. Last year we found matsutake in Colorado for the first time and had a blast immersing ourselves in cooking. There is so much lore surrounding this particular mushroom, it’s hard to know where to even start the discussion. Many people know this mushroom because it can attract hordes of commercial hunters. Or maybe because it fetches a huge price, can look phallic, smells unique and is somewhat of a mystery. Whatever the case, lets talk about it! 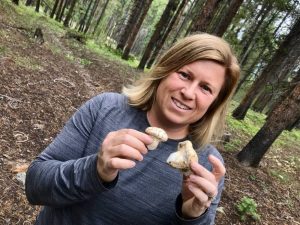 Kristen with a Matsie in a Colorado lodgepole pine forest

The matsutake grows most abundantly in the Pacific Northwest and in Asia. While we have a species here in Colorado, it can be elusive. Typically found in in lodgepole pine forests or mixed conifer with pines, conditions must be just right.

Most matsutake are found in the West in a wide variety of locales from September through January. Habitats range from tanoak-madrone forests in Northern California, to pine forests in central Oregon, to the dunes in coastal Oregon or PNW forests generally all the way up into BC.  They can be found in the Rockies, the upper Midwest and the East Coast too, but not in the the same quantities and are therefore considered elusive.

Famously called “pine mushrooms”, matsutake especially favor pine trees in most habitats, they are mycorrhizal as they have a symbiotic relationship with the trees. They can be found with ponderosa pines, lodgepole pines, shore pines, douglas fir, true firs, hemlock, tanoaks or pacific madrones.

We love to hunt matsutakes in Oregon’s coastal dunes in November. This is the sandy swath of coast between Yachats and Coos Bay where the dunes might stretch up to a mile or more inland and host shore pine and pine/fir forests that are mossy and lush. Matsutake are always found growing in sandy soil, more specifically a sandy layer of soil called spodosol or podzol. The stem butt will always show signs of the fine, gritty sand – no exceptions. 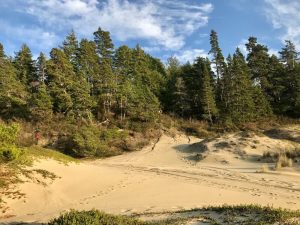 It’s a bit like hunting spring porcini. You will sometimes see big “flag” matsies sticking up, but the tastiest mushrooms are the ones that are still under the duff – “mushrumps”. In fact, when you find a flag, it is a good idea to get on your hands and knees and search the area for younger mushrooms nearby. Sometimes you will see large disturbances of moss where other hunters have rooted around previously. The best commercial hunters remove the flags and then subtly pick choice mushrooms leaving the entire area undisturbed. Why? because they will come back to that spot all season, year-after-year and pick large amounts. They don’t want you (or me!) to know that that is the spot they grow. There are strict limits to the harvest that must be observed in these forests, and in some forests only a few mushrooms per day may be collected. Fortunately, a little matsie goes a long way!

When on the hunt, we train our eyes to look for humps and bumps and shrumps – where young buttons have pushed up the pine needle/moss duff but haven’t quite emerged. We also look for disturbances where other pickers may have picked last week and try to find mushrooms that have popped up since.

Matsutakes grow very similarly in Colorado, of course in lodgepole pines. They look and taste almost exactly the same as the PNW matsies. We found them at high elevation around lodgepole pines – 9500 – 10200 feet.

The Western matsutake has long been thought to be Tricholoma magnivelare but very recently has been reclassified as Tricholoma murrillianum. The change is so new in fact, it is really only known if you look online. Most published books aren’t yet up to speed. Whatever the case, we are not sticklers about the species — lets just call them matsutakes. Or, matsies. 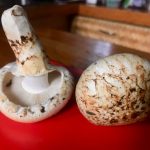 Wherever you pick in the West, make sure you have your permits in order! This is the mostly highly regulated and permitted mushroom in the country – you will know what we mean when you try to get a permit in Oregon. Commercial permits are expensive, $200 where we hunt, and hard to obtain. In some parts of Oregon, the National Forest Service even regulates where you can camp while picking. Make sure you understand all the rules.

You may encounter other hunters in the woods, often commercial hunters. Oddly, this mushroom has a huge value in Asia, especially Japan, where it fetches possibly exorbitant prices. #1 buttons can go for over $1,000 a pound if you believe what you read! Undoubtably, hyperbole runs strong here. Locally, it’s pretty rare to find a restaurant offering matsutakes in their meals. This probably has something to do with its unique flavor profile. A matsutake is not your average mushroom and should not simply be substituted into one of your other mushroom recipes. Good matsutake recipes are only good for matsutakes!

Please be forewarned, there is a poisonous mushroom, Amanita smithiana, that can be confused with the matsutake. If you are a newbie, go with someone who knows what they are doing. Never eat a wild mushroom you can’t identify with 100% certainty.

An edible and closely related lookalike, the Catathelasma, also lives in similar regions. In coastal Oregon this mushroom is often found more inland than the matsutake. More like a conventional mushroom in taste and flavor, the Catathalasma is very solid, bordering on tough – but holds up well in meals! We peel off all skin and cook it up regularly.

Here’s a great reference to learn more about Matsutake ID.

It is hard to explain what the matsutake tastes like – it defies traditional explanation. I would describe it as cinnamon, cedar and and red hots. I know, it sounds pretty gross. If you do a search online or look in cookbooks, many recipes originate from Japan and can be unfamiliar with uncommon techniques and ingredients. We have been experimenting with a lot of different cooking methods, here are a few highlights: 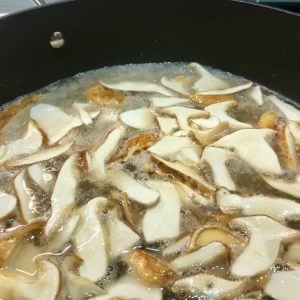 Matsutake Shrub or Drinking Vinegar being made 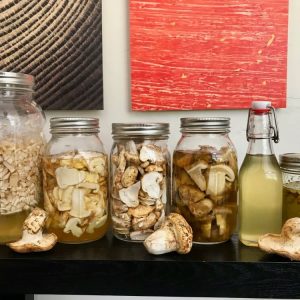 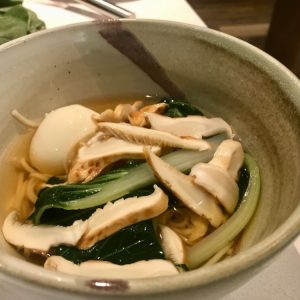 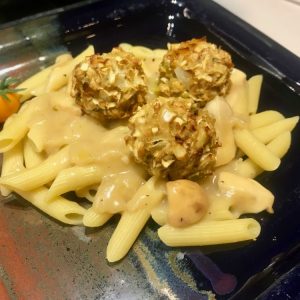 If you look online, you’ll find a whole lot of competing and contradicting information about these mushrooms. The one consistent thing that almost every matsutake writer agrees upon is a quote from the eponymous David Arora explaining the smell: “a provocative compromise between red hots and dirty socks“.

There, we said it too! It’s a truly ineffable smell that is hard to deconstruct. Once your senses have had the experience, it will be nothing but “matsutake” to you.

Some authors recommend that you sauté the matsutake or add it to creamy soups. Others recommend pairing with clear broths – not butter, cream or oil. Kristen and I are in the clear soup camp, and avoid dairy and frying. Why? It seems to us that the matsutake doesn’t need any butter or oil to release flavor. If oil is a must, try sesame. If you throw it into hot water for a few minutes, the flavor shines and so does the smell! Even in the grilled method mentioned above, the technique seems to mellow the flavor of the mushroom while the steamed rice technique enhances.

We are constantly experimenting with this mushroom. Classic matsutake cooking advice originates from Japanese culture and tradition – perhaps there is a newer, dare I say – more American – way to prepare these?  Chad Hyatt’s The Mushroom Hunter’s Kitchen  has a tasty matsutake fig jam that is a savory chutney style spread.

Here is a recipe that we adore from Graham Steinruck. It’s featured in our Wild Mushroom Cookbook. Enjoy! 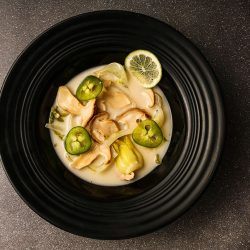 Cooking conversations naturally lead to preservation. Conventional wisdom says don’t dehydrate this mushroom, instead freeze it. We preserve most of our harvest by slicing thin, simmering in just a minimal bit of water (with a lid on) for a few minutes, and then freezing the mushroom in this flavorful juice. We store in freezer bags laid flat kept thin (do many small portions if you have a lot of mushroom/liquid). This method allows you to open the bag and chip/break off a few tablespoons of  the frozen concoction which can then easily be added to soup or rice. The rest of the bag just goes right back into the freezer. It seems to work for maximum flavor intensity and is our goto method. 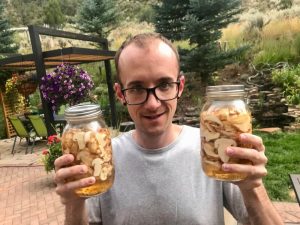 Graham Steinruck with some of his matsutake preserved.

This year we also dehydrated and freeze dried some of our harvest and even made some powder. It is sadly true that dehydrating does reduce some of the flavor. The dehydrated mushrooms from last year have also degraded and lost much of their potent smell. Yet, dried matsutake is more convenient and we have enjoyed adding the dried matsutake right into our soups and rices. The less intense flavor proves to be friendly in the soup, but not spectacular. The freeze dried matsutakes however have been excellent and seem to maintain their aroma and even get a bit sweeter after being freeze dried. We will keep experimenting especially with the freeze dried product.

A favorite preservation method is via pickling. We tried several brines and really liked the one made by Graham Steinruck with rice wine vinegar, mirin, salt and soy. We slice them pretty thin and then eat them within a few months while still firm. This recipe is in the cookbook 🙂

The competing advice continues online… don’t wash or peel the skin off – or if you do wash, then wash very gently. People are opinionated! We wash them hard and scrub them down. We may even wash them again after slicing them, scooping them out of  the water to leave grit behind. We don’t think they mind the water in the least. In some habitats they hold a crazy amount of sand. Generally speaking, many experts advise you not to wash wild mushrooms. Yet we do it all the time.

Colorado Matsutake buttons getting leaned and ready to preserve. Captured the third week of August.

Pro tip: sand cleans off easiest right at or after you harvest. If you let them sit for a day or three, that sand really gets glued on to the mushroom.

Another item reported by experts is that buttons are best. Duh, of course, #1 buttons are always the best! But the #2s and #3s are also pretty darn good, and in my humble opinion seem to have even more matsutake flavor. We enjoy them greatly. One downside is they are a bit tougher, notably the stems. The solution is to separate the stems and use the caps which are less chewy and taste better. Use the stems by slicing across the grain which makes them less chewy. Another solution, mentioned above, is to slice this species pretty thin. Try taste testing all different sizes and see if you agree.

Here is a webinar we did recently with one of our favorite matsutake experts, Joseph Crawford:

Hopefully there will be many matsutake in our future, and yours too! Let us know in the comments below what you think. If you have tips for any special habitat/area, by all means please share.