Here are some of our IDEAS for collecting: 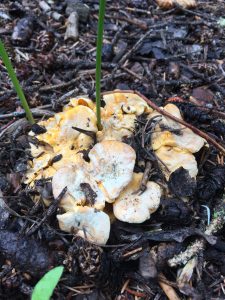 Below you’ll find some other opinions, facts and alternative truths. Based upon internet research, here are a few supporting, or, dissenting opinions and science:

A bit about Mushrooms from Penn State “Sustainable Harvesting of Wild Foraged Goods for Niche Markets“:

“Mushrooms live mostly as a mycelial mat in the soil. The functional structure we see growing above ground is just the reproductive, fruiting structure that disperses spores. Morels are frequently encountered around specific host trees, since they may be symbiotic partners or opportunistic parasites on certain trees.” (Source: Sustainabl)

That is definitely true!  We look for specific wild mushrooms in specific types of forests, near specific trees. In Michigan you would look for morels around (dying) ash trees or apple orchards especially. In Colorado we look for big conifers, especially firs, for our porcini and chanterelles and avoid aspens like the plague. In Oregon we love the Grand Firs! But, I think the point here is that picking a mushroom might not be any different than picking an apple.

Long-term studies have demonstrated that most of this doesn’t matter:

Mushroom Picking study by Simon Egli et al 2006 was carried out in Switzerland in two locations from 1977-2003. They tested overall effect harvesting, different harvesting methods (cutting vs pulling) and also tested the effect of trampling on the forest floor. Here is what they found:

“The results reveal that, contrary to expectations, long-term and systematic harvesting reduces neither the future yields of fruit bodies nor the species richness of wild forest fungi, irrespective of whether the harvesting technique was picking or cutting. Forest floor trampling does, however, reduce fruit body numbers, but our data show no evidence that trampling damaged the soil mycelia in the studied time period.”

So, go for it, but, if you trample it will impact the rest of the season, but not the long-term health of the underlying fungus or future year’s abundance.

The Oregon 10-year Chanterelle Picking Project by Norvelle 1995 confirmed this. In this 10 year study, chanterelle plots that were picked actually did a smidge better than the unpicked. But, it was not statistically valid. Pulling or cutting was irrelevant. Go figure.

However this same paper by Norvelle does point out the true killers of wild mushrooms:

Norvelle also makes an interesting “visual observation” that chanterelles do best in a “judiciously managed” mature forest… if the trees were too old or too young they underperformed. Keep in mind this is probably specific to the Portland area chanterelles.

Finally, check out a good article from FUNGI Magazine on the topic that has a lot of links to research: Agaricidal Tendencies: Settling the Debate over Cutting vs Picking and the Sustainability of Wild Mushroom Picking by Britt A. Bunyard