Preserving foraged food is always a challenge. Especially if you are unwilling to compromise. We want our preserved food to be as good, or better, than the fresh version. Its the middle of asparagus season in Colorado; let’s talk about one of our favorite ways to preserve the harvest – pickling. We have been hard at work on our pickling recipe this spring. Here are some good guidelines for pickling asparagus. 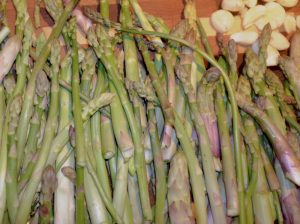 Refrigerator Pickles vs Canned Pickles: If you want to make refrigerator pickles, just pour boiling pickling liquid (see recipe below) on the asparagus, cap, let sit a few hours at room temperature and put in your fridge. You’ll enjoy delicious pickled vegetables that last about 2 weeks. Canned asparagus will last much longer – at least 12 months. We don’t have a proper pressure canner, so we use a bath of boiling water to can our jars. Boiling for exactly 15 minutes will get the job done.

There are three guidelines:

The Picking Liquid:  This is the most difficult part! Getting your pickling liquid right is an art form – always a work in progress.

Next round of pickling, we are going to try some ingredients recommended by a friend – celery salt and whole arboles peppers.

Add some yummy flavor: This is an area for experimentation. Currently we are trying some different types of peppers (whole dried peppers instead of pepper flakes) and also celery salt instead of dill. We put the following ingredients into the bottom of each quart sized jar. Feel free to use more or less based on the size of the jar or your desire for spice: 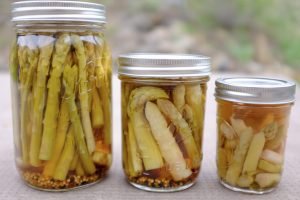 Get the Jars right:  Whatever you do get wide-mouthed canning jars – they are so much easier to work with! After harvest, we save only the best asparagus for canning. Older asparagus typically gets set aside for soup. Asparagus then get sorted by size so that the longest pieces go into quart jars and the rest go into pint jars. Pint jars are preferred – they offer a nice portion size for a meal. Each spear is cut down into the perfect size to fit into the jars. Carefully layer them into the jars, again – as tight as you can. Make sure spears are short enough to be covered in liquid and still leave enough headroom in the top of the jar for air (about an inch from the top of the jar). Don’t forget the middles – these are good too, mix them in… top spears are not necessary on every piece. End pieces can be utilized as well, usually we pack them into a small jam jar and pickle as bite-sized pieces. We can’t wait more than a few days before opening to see if we like the recipe, these are great “tasters”. The toughest end pieces are reserved for soup.

Try some other vegetables while you are at it… but do them in their own jars, don’t mix and match. Our favorites are beets (we roast and peel and then cut into chunks), cauliflower (just pickle raw) and beans (blanch for a minute before pickling).

Avoid fancy vinegars. Plain old white vinegar works best. We have tried other vinegars and they add a lot of flavors and sweetness but they are not as good!