Morels and Porcinis in the Rogue-Siskiyou National Forest

On the Mushroom Trail

If you follow our adventures, most of you know that we head to the Pacific Northwest each year to chase burn morels. Although we usually trek West one week before and one week after Memorial Day Weekend, this year we had a very important event to be back for – high school graduation! We watch the weather like hawks for up to a month prior to the trip, and Mother Nature really wasn’t participating – hot, hot and dry weather in Oregon, not a drop of rain. We deliberated much – should we go to Arizona and California instead? The weather looked only marginally better during this timeframe. Washington? A much farther trek. In the end, the forecast changed and the rains were in sight, so we decided to head back to one of our favorite areas, Southern Oregon. Was it the right decision? Read on…

Most all of Oregon’s A burns this year were centralized in the Southern region. In years past we have spent most of our time in and around Bend, Prineville and the Northeast. This year we camped for a week in the Rogue River-Siskiyou National Forest around Crater Lake National Park and Prospect, Oregon. Instead of chasing burn morels at different burns around the West, we settled into a superb camp spot on a small river between Crater lake and Prospect. Friends joined us and we stayed a week. Our expectations for burn morels were running high. After a snowy winter, a cold spring, a month of hot and dry the rain had just started a few days earlier. And there was a lot of rain in the forecast. We were hoping the burn morels would pop.

Turns out Mother Nature had other plans. Even though there were plenty of burned forests in the area, the morels never flushed while we were there. We explored hard for over a week and found morels but never in abundance. We visited burns from 3000 to 4800 feet and did best around 4400 feet. Same results for natural yellow and black morels in the area. A few savvy locals were selling natural morels to the local mushroom buyer but otherwise not much success to report in the area for morels. Oregon had experienced a late spring (lots of snow and a cool March) and then a month of hot and dry weather. That month of hot and dry really pissed off the morels! We arrived a few days after the first rains, but, it was also very cool (In the 40s cold!). Conditions were far from ideal, it was just too damn cold. 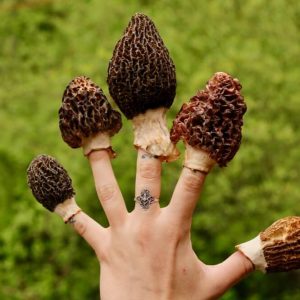 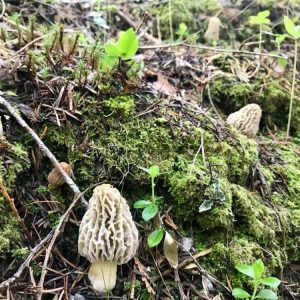 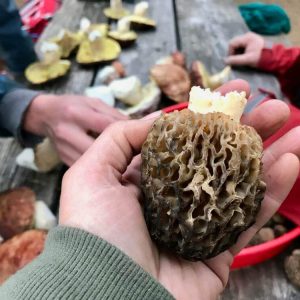 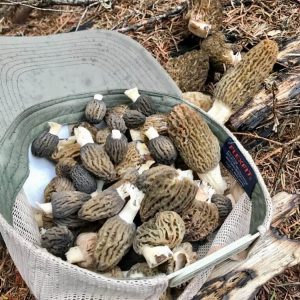 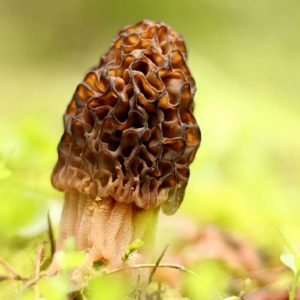 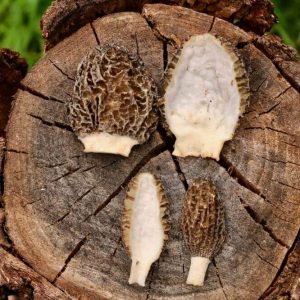 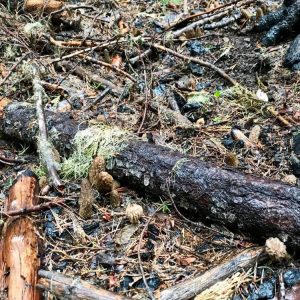 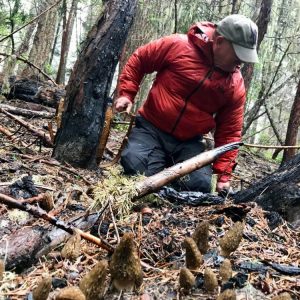 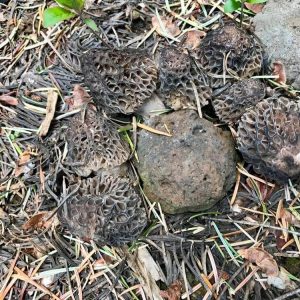 We were receiving reports of burn morel activity in Arizona, Idaho and Washington but ended up hunkering down in the Prospect area. Why didn’t we pick up and go? It helped that we really enjoy that part of Oregon even when the foraging is mediocre. Our truck was acting funny and needed a spa-day at the dealership. We have plenty of burn morels left over from last year and still have 6 weeks of burn morels in Colorado to pick!  Mainly though, it really didn’t hurt that the Spring Porcinis were popping up! And we love us some spring kings.

Boletus rex-veris or Spring Porcini really kept us busy that week. We found them at different elevations and as high as 4000 feet, but they were most abundant around 3000 feet. During the week we found porcinis immediately adjacent to different conifers. Overall, we favored the grand firs in this area and the porcinis favored them too. Monoforests were avoided – where all the trees are the same size (because they were all planted at the same time). The mushrooms were most abundant in a mixed forest where there were some large, medium and small trees. We did especially well when we walked old skid roads and two-tracks in the forests. Frequently they were found shrumping under small firs that grow on or beside those old logging roads.

A beautiful and large porcini. Notice how white the pores are? It is fresh. 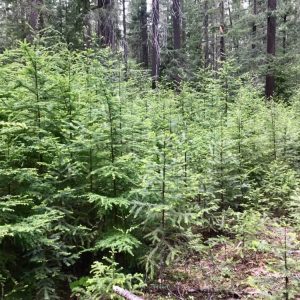 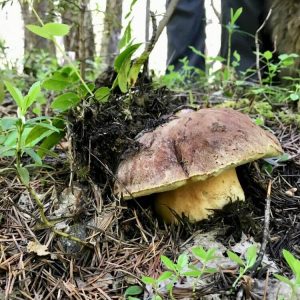 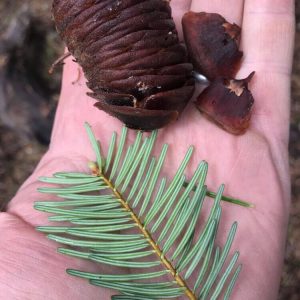 Here are needles and pine cones from a Grand Fir – Abies grandis. You usually don’t find the pinecones becuase they break up into the individual pieces. Also, the needles are shown upsdie down so you can see the underside 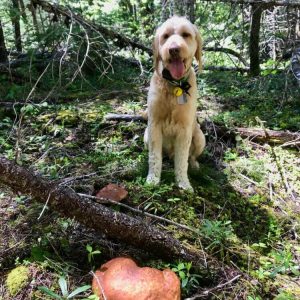 Benzie posing with a porcini 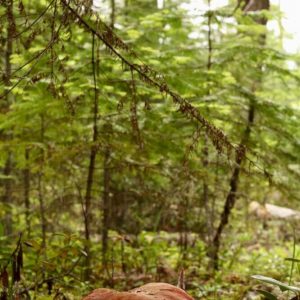 Boletus rex-veris in the forest

If you are out looking for Boletus rex-veris in this area, we recommend you look for mature but logged forests with trails (even old and overgrown logging trails) and walk along those trails until you find some… then slow down and look around. If you have never picked the Spring King, it is important to know that it emerges from under the duff and often the choice buttons are visible only as small “mushrumps” that haven’t erupted into a fully adult mushroom yet. Scanning the forest floor for suspect shrumps is how you find the really good ones. Or, when you discover a large overgrown “flag” mushroom, look closely nearby and find smaller and fresher mushrooms. Take good GPS in this area – we have to navigate both National park and private land boundaries. Plus, the USFS provides a mushroom harvest map

A Panorama of Porcini country. Notice some larger trees, medium trees and smaller trees.  They are mostly Douglas Fir and Grand Fir

The size of the mushroom can be deceptive… the true essence of a #1 button is not really its size or shape… it has to be rock hard, have white pores and be bug free. As the mushroom ages, the pores get darker, the mushroom gets softer and it often fill with maggots. These slightly older ones are best for dehydrating and do taste excellent when rehydrated. The smaller and firmer ones are excellent when cooked up fresh, grilled or can be frozen or dehydrated. One of our favorite ways to preserve the buttons is to roast them in the oven and then freeze them. 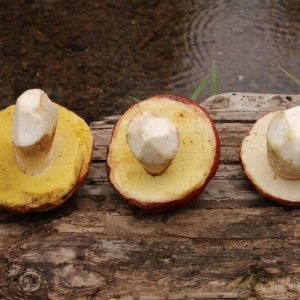 Notice these pore colors on these three similar mushrooms. The one on the right is clearly the best of the bunch!

This is a superb porcini – it is rock hard, has mostly white gills, and is bug free 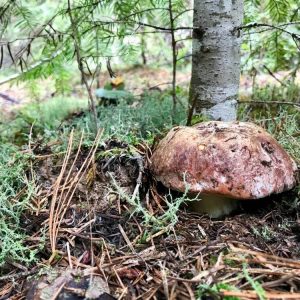 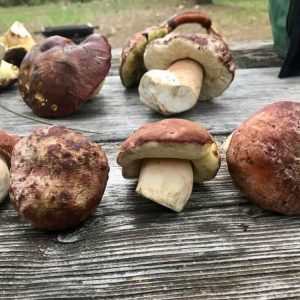 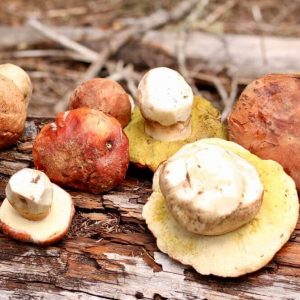 The forest had many other mushrooms but two were most prevalent among the boletes. The first was a yellow coral that the deer love to eat. We found it frequently had been pawed at and chewed up. The second was an amanita – Amanita gemmata – which tended to grow in the same terrain the porcini were in and we came to see it as a favorable indicator. 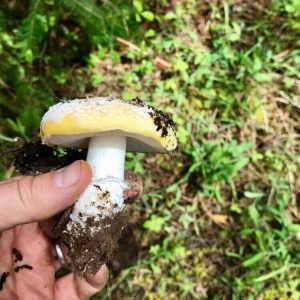 Amanita gemmata were abundant and a good indicator for us finding porcini. 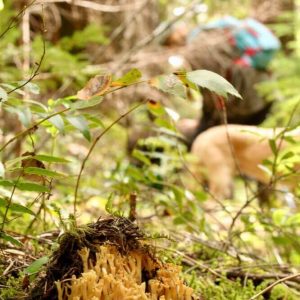 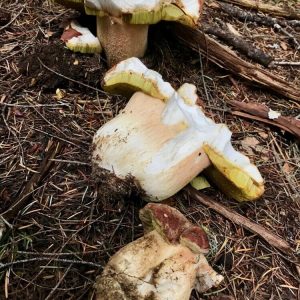 These Boletes had been seriously munched on by the deer 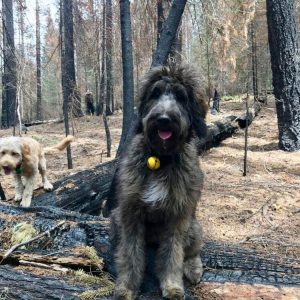 Lulu (and Benzie) in a burn 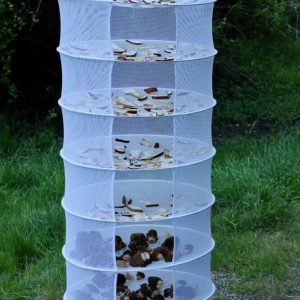 Porcinis and Morels in our hanging dehydrator. 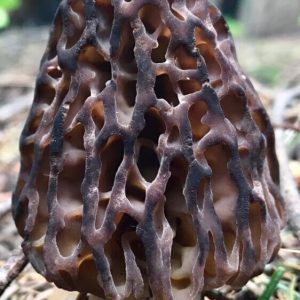 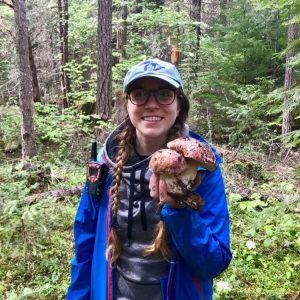 Kate with a handful of ‘cini 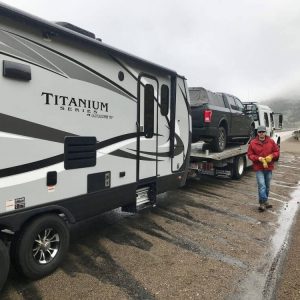 Yep, that’s us – broken down on the side of I-80, just trying to get back to CO – we sidetrekked to Twin Falls ID for a small delay 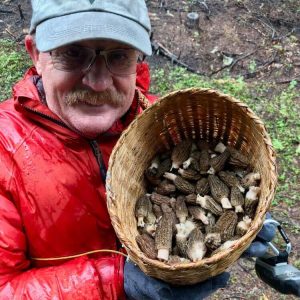 Jeem with his basket of morels

As the week progressed the ‘cinis got a bit long in the tooth. We still found nice fresh ones but less frequently and they also became more buggy. It was time to move to higher elevations or new locations or just head on home. What to do?

Even after 6 years of hunting burns, there are lessons to be learned. First and foremost, Mother Nature is #BOSS. She is fickle and you can’t always count on her. I wish we were closer to Prospect, I’d love to know if those morels ever did pop in the burns with warmer weather or did 2019 go down in history as “just a bad year” for the burns. At the time we were there the mushroom buyer reported that the area was at 10% of normal. Frankly we felt lucky to find what we did. Secondly, it’s not all about the rain – even though it was so hot and dry prior, we should have checked predicted temperatures. You can’t just assume the end of May in the mountains will be warm! And finally, good times with great friends is just as important as hauling a motherlode of morels home. We left feeling enriched if not completely satisfied by our mushroom finds.

So we headed home. The truck was suspect, Kristen had a cold, the ticks were teeny tiny and insane (poor dogs, frontline does not get them all!) and graduation was nearing. Good thing we bolted a few days early because the trip home was an adventure in itself. There is always next year… and we are hopeful Colorado burns will be popping any day now!