Low and Slow for Black Trumpets

This year we were lucky enough to visit friends in Eugene for the holidays. We spent most of the week camping in Reedsport, OR where the mushrooms and dungeness crabs were aplenty.

After a heavy bout of Thanksgiving feasting (where I safely consumed my first very carefully and professionally prepped amanita!), it was time to hit the woods. We had black trumpets on the brain, and had heard that they might be starting in the Brookings area. This is a mushroom we have never sought out or found, so of course we headed South! We were keen to learn more about black trumpets – they are known to taste delicious and are reputed to dehydrate and hydrate gracefully. Something that can’t be said for their favorite Chanterelle cousin (the dehydrating part anyway). We did know one thing for sure about these little beauties: They are mycorrhizal with Tanoaks and are found on the coast of Southern Oregon and Northern California. Not much to go on, but enough…

South, South We Must Go

We trekked down along the stunning Oregon coast and found Tanoaks way South, not far from the California border. It was a bit tricky at first to visually recognize a Tanoak, a new tree for us, in the winter forest – no snow of course, but lots of brown. A range map of the Notholithocarpus densiflorus (aka Tanbark-Oak) is included below as well as some pics from wikipedia. Long story short, we eventually learned to recognize these new friends thanks to the acorns scattered on the ground below the tree. And, not gonna lie, we had a few tips from some super awesome friends.

The Black Trumpet Craterellus cornucopioides (aka Horn or Plenty) is a relative of the chanterelle. Besides being mycorrhizal with Tanoaks, they flourish during the winter, coming out in different fruitings. We were looking for the season’s first bloom, since the end of November is a bit early for this mushroom in the Pacific Northwest.

After figuring out the tree situation, we explored a few different spots. Because we were scouting a new area, we ended up driving a lot – down roads in state and national forests looking for oak. We’d hop out and explore for 15 or 30 minutes and move on if we didn’t find anything. Eventually we found our first black trumpets in the brown forest undergrowth at the fourth spot we visited. AMAZING! Since it is a very difficult mushroom to spot we likely walked by many!

The good news is that when you spot one there are probably more. They are gregarious fellows and we were so lucky to find several pounds, often in clusters. This mushroom was easiest to find when you got “low and slow” – taking your time to carefully scan the ground at a squat. When we spotted one, we would slow down and perimeter check the whole area around the tree. 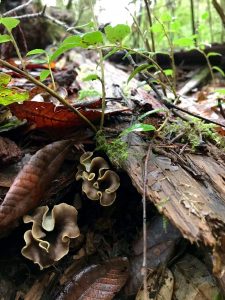 These guys are hiding

Nestled under some cover 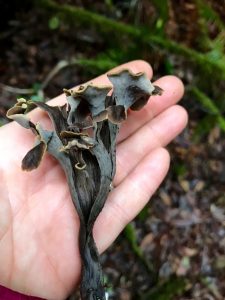 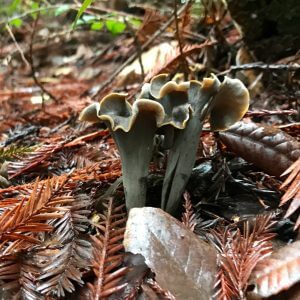 The tanoak leaves are next to this black trumpet. notice the one on the left? 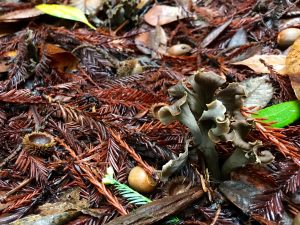 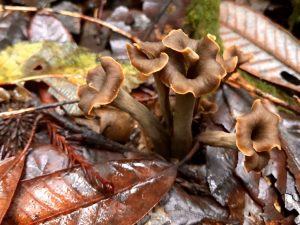 Auto color correct made this brown! 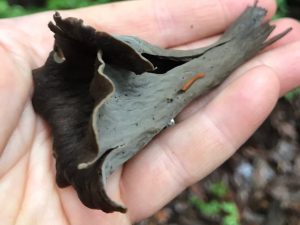 This is one of the larger specimens 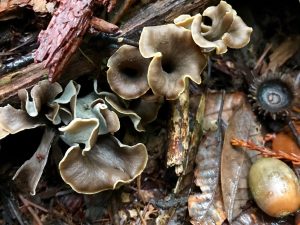 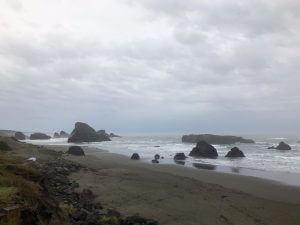 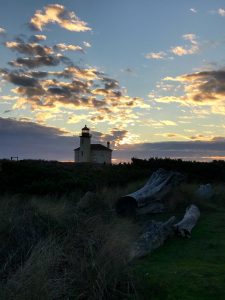 Lighthouse on the coast – Bullards 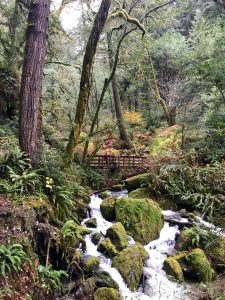 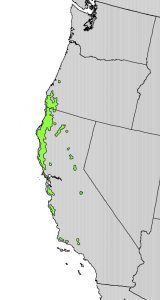 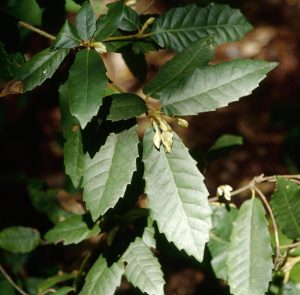 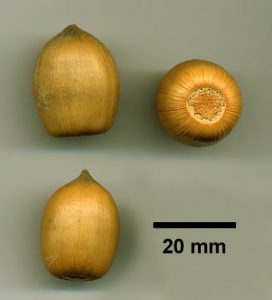