Medicinal mushroom tinctures are all the rage right now, and with good reason – they are easy to make and are a great way to get mushrooms into our bodies on a daily basis. While we prefer to eat mushrooms, many medicinal mushrooms are not really all that yummy. So… we turn them into tincture which we add to coffee and tea. After several years of making double extraction methods using medicinal mushrooms, our techniques have regularly evolved. In the last few months however, they have really changed pretty dramatically.

The biggest factor driving the changes in my tincture recipe are the medicinal mushrooms themselves. We want to get more mushrooms into our bodies, and therefore into our tinctures. This definitely means just eating more of the mushrooms, in our food. That works great for lionsmane, 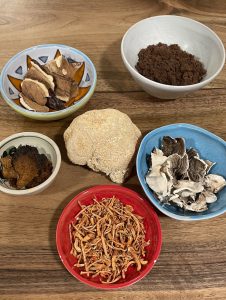 maitake, oyster, shiitake, cordyceps and other gourmet mushrooms since we forage them in the wild, cultivate them, or buy them. We can eat them fresh or dehydrate them and cook them into food later. But, for medicinal mushrooms like turkey tail, chaga, reishi, artists conk, red-belted polypore, birch polypore and similar species, this is untenable because they just don’t taste good. We have definitely started using extract powders a lot more as they are an easy way to add these species to drinks and food and don’t taste too bad. But of course, powdered extracts are quite difficult to make, so we buy them. My hands-down favorite brand is Hamilton’s Extracts. These powders really allow us to easily push more medicinal mushrooms right into our bodies.

This desire for more mushrooms is partly a rising-tide sort of thing. The more we learn, the more we want to get more grams of mushrooms into our bellies, more times a day, more days a week. Daily mushroom consumption seems to be an entirely positive thing. Furthermore, I want to get some variety as different mushrooms bring different benefits. I try to consume several different species each day.

While I have written extensively in our how to make mushroom extracts article about how to make your own tincture, I question my own methods! Why? I did the math. It looks something like this: 50g of mushrooms makes a double extraction tincture that is approximately 1200ml when complete… 300 ml of alcohol and 900 ml of H20. I was able to increase that a bit, but not much. You just cannot put more mushrooms into the jar and cover them with alcohol. 50g of mushrooms for 1200ml of tincture is a 1:24 ratio of mushrooms to tincture, or approximately 4%. Keep in mind there are a lot of factors and this is just an estimate.  (I worked the math immediately below if it helps.)

One way to overcome these low mushroom percentages is to soak 1/3ish of your mushrooms in the alcohol and then do the second soak in water (emphasizing the polysaccharides a bit over the terpenes). This leaves way too much water! But, you can boil the water down until it is the right amount of water.  Our friend Dr Dave (Carbondale Acupuncture Center) uses this technique which hails from his traditional Chinese medicine background .  We have erred on the side of caution and tried not to boil our h20, but, who knows? It is a traditional technique and some modern science indicates the boiling is OK too.

This desire for more mushrooms per ml is only heightened by Christopher Hobbs and his new book Medicinal Mushrooms. Fantastic book! He really advocates for actually consuming the entire fruiting body, even of bitter non-gourmet mushrooms. He has several recipes, techniques and tips to help you do so. But, we still like tincture for easy daily consumption.

Mentally, all this came to a head when I was taking a class by the medicinal mushroom duo of Tradd Cotter and Robert Rodgers. I really trust these two individuals and their opinions on this matter. They did some more math during the class, demonstrating that it just doesn’t make sense. If I want to consume 50g of mushrooms, I would have to drink a cup or two of tincture potentially… eek, that is too much! The tincture is 25% alcohol – way too much booze. Fortunately, they provided a solution which really makes sense. Read on…

Before Continuing, here is a bit of a math breakdown and some of the challenges.

Tradd and Robert’s solution to a more concentrated tincture was simple: do multiple soakings with the same liquid. Basically, after each soaking, reserve the liquid and re-soak it into another batch of mushrooms. In practice this was harder than it seemed. 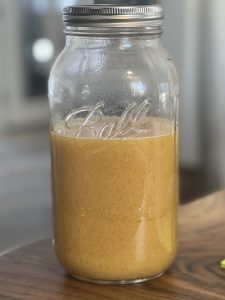 The first time I tried it, here was what I did:

This tincture seemed of very high quality! It took over six weeks to make with three alcohol soakings and one water soaking. You can see the picture above to the right, this was made from red belted polypore (Fomitopsis mounceae) foraged in Northern Wisconsin.

This seemed like a real win, in that I was able to push almost 3x the amount of mushroom matter into this tincture.   150mg per 1500mg of final tincture is a 1:10 ratio or a 10% concentration of mushrooms. 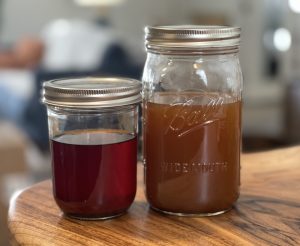 Ultimately, I didn’t like how “thick” the final water soak was and wanted more liquid in that soak. It was like clumpy oatmeal, and I would prefer a very runny oatmeal with some liquid pooling in the bottom of the pan. Plus, I was kind uncomfortable with the precision of the alcohol to water and wanted to get a bit more precise on that.  The precision problem was because of the alcohol that was carried in the marc from the alchol soak into the water soak.  Some algebra is required to calculate ratios at that point. Little known fact about me, I used to be a high school math teacher, so I kinda enjoy the algebra.

For my next iteration, I did the three alcohol soaks pretty much the same way as described above. But for the water step, I decided to dry out the marc, which was worked brilliantly!  Several advantages:

But there was no way I could soak the 150mg of mushrooms in 600 ml of water, that just wasn’t enough water. 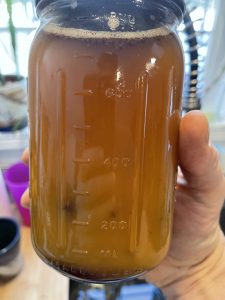 Artist Conk Tincture. Note all the little black bits, those are fruit body. I don’t worry too much about some small chunks in my personal tincture.

Although I actually needed more water, as I remembered that 200ml of water, at least, would be left in the final marc, even after aggressive squeezing. So, I revised the water soak: 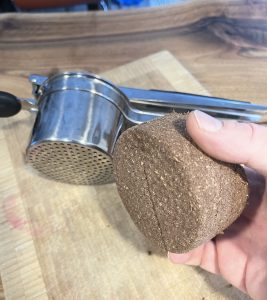 Ok, you can see where this is going right? Next, I added a third water soak, but this time added back in 75g of fresh ground dehydrated mushrooms – these freshies were not reused post-alcohol soaked marc. That means I did 3 alcohol soaks, then using the leftover mark, did 2 water soaks, and then completed a third with soak with mushrooms that had not been soaked before. I carried 150g through the first 5 soaks and added an additional 75g for the final soak. I used 225g of mushrooms and yielded 800ml of tincture or a 9:32 ratio – this was our high-water mark of 28% concentration, mg:ml.

Ultimately, this final soak seemed like too much work and I had to throw in 50% more mushrooms for just that one soak.

A few discoveries along the way

My final solution, and favorite new method is to use the Triple Triple Double method when I have plenty of mushroom body and when it is an easy mushroom to work with like turkey tail or reishi. With a more difficult mushroom like maitake, I would prefer to use the original double tincture method where a single pressing is used for both the alcohol and water soaks.