Have you been paying attention to our diminishing snowpack here in Colorado?  People are starting to get a bit worried, especially in the mushroom community. It got us to thinking though… how does snowpack affect our mushroom season? We decided to take a look back at previous years and compare precipitation timing to mushroom photos on our phones.  With Snowmageddon coming this weekend, hopefully our outlook will be improving!

So far, it is a tough year. Our watershed in the Roaring Fork Valley is at 76% of average and we are doing better than many places in the State, or the SW for that matter. That puts us in the 17th percentile currently.

Keep in mind, all of this data, and our recaps of the season, are relative to our watershed – the Roaring Fork. Different watersheds have different numbers. Even within watersheds, wide variances exist because they represent large areas.  That said, we also think that if we visited nearby zones (Upper Colorado, Vail/Eagle River, Grand Mesa/Gunnison River, Flat Tops/White River) the results would be similar each year.

Certainly take this info with a large grain of salt, I may be over-reaching. 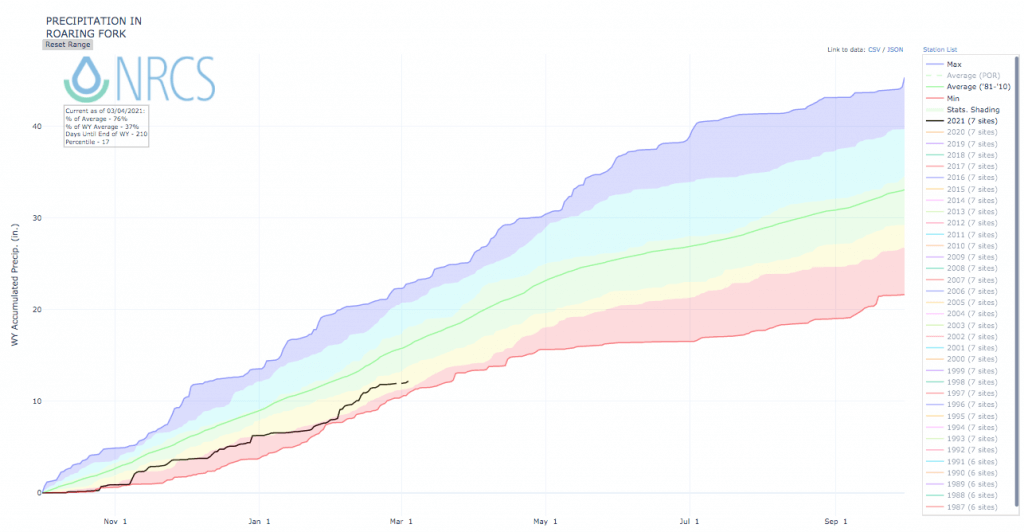 This shows cumulative precipitation for the Roaring Fork valley. The underlying shading breaks (from pink to blue) represent percentiles: 10th, 30th, 50th, 70th and 90th. The Green line is the median. The Red and Purple lines are minimum and maximums. The Black line is 2021 YTD, or WYTD (Water Year To Date).

This graph is from the Natural Resource Conservation Service (Colorado) which publishes the Colorado Basin-Wide Interactive Snotel Graph | Period of Record Precipitation, by Sub-Basin (Roaring Fork)

Maybe it is too soon to panic. Other years, like 2015, were good mushrooming years and they started out just like this year. After reviewing the last 6 years, the data combined with our Colorado mushroom hunting experience, suggests rain in spring (for morels), and monsoon rains in summer are key success factors. Colorado mushrooms need consistent seasonal rain to excel. The total rainfall needed for a decent hunting season was about 10 inches of rain (in the rain gauges) from April through August; 2 inches a month seemed sufficient. It also helped when that precipitation accumulated steadily through those months… 3 weeks of no rain spelled trouble and put the kibosh on things. 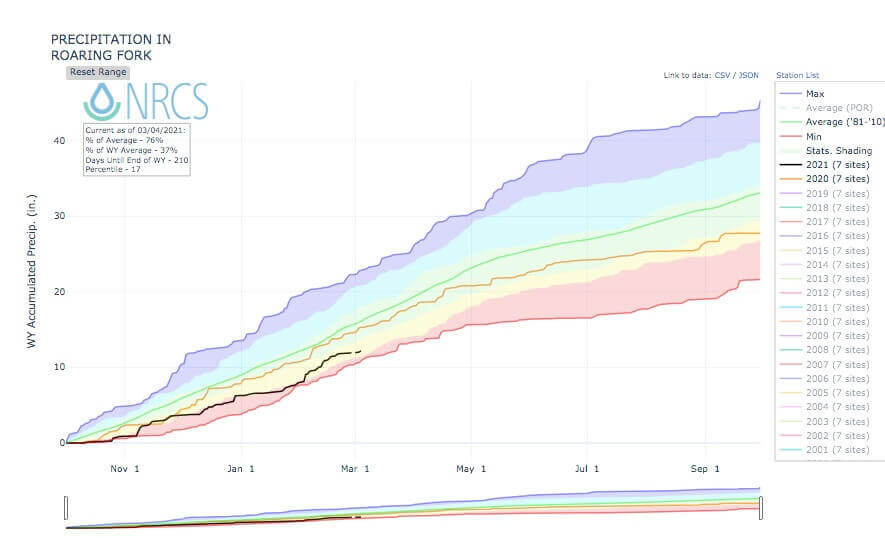 The 2020 line is orange in the map above. We had a terrible season – it was incredibly hot and dry and half the state burned. Porcini were scarce and the other mushrooms never came. Why? It barely rained from mid April through August. You can see our rain cumulation was close to average in early April and slowly slipped. In an average year we get about 10 inches from April through August. Last year we got five.

2019 was an epic mushroom hunting year through the end of August. Healthy spring morels moved into an exceptional burn morel season with our local Lake Christine fire pumping out lbs of morels through mid to late August – slowing only with the end of the rain early August. Porcini were stunning in early August and matsutake fruited like crazy mid August. Chanterelles didn’t like the dry august and had a very short window. Many in our spots were off to a good start and then quickly shriveled to nothing. 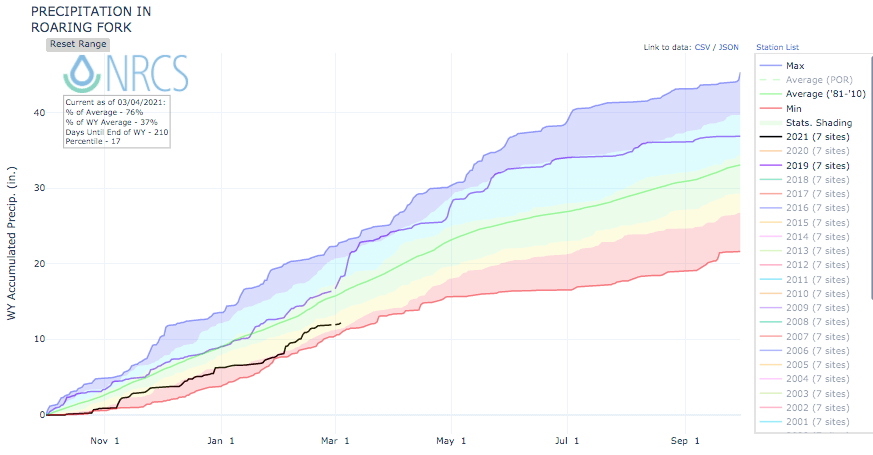 2019 is purple in the graph above. It was a nice average year until March when we got big snow storms. From there we maintained good rain through the end of July despite the fact that monsoon activity was not normal. The rain stopped around August 1 – we did get 10 inches from April to August, we just got all 10 before August. In fact, we had a long slow spring and much of that heavy precipitation came as snow in the high country throughout April and into May. Runoff was still going strong through most of June. 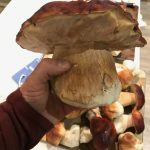 As you may remember, 2018 was the worst year ever.  You can see it below in dark green. 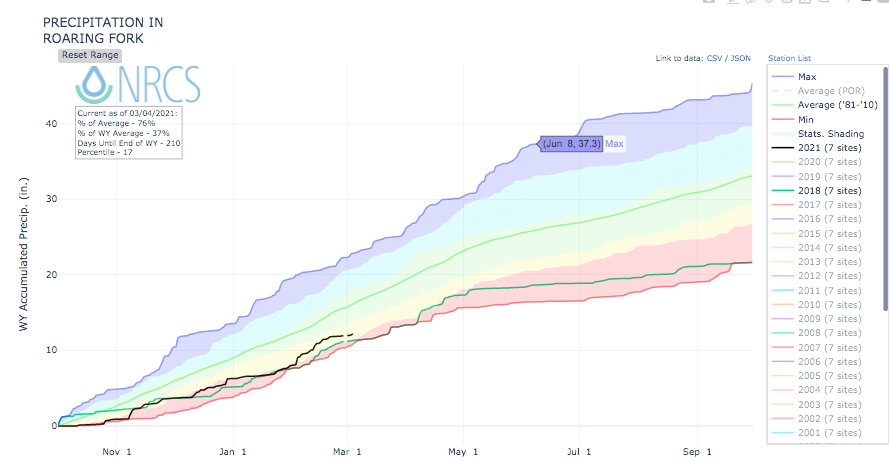 June 22, 2018 we found some burn morels drying up quickly

August 11, 2018 we found a few porcini today, but no more the rest of the season

2017 was an OK mushroom year. We got some of everything that year, but not great abundance like in some years. Our chanterelle season seemed to end prematurely at the end of August because the monsoons never really came and chanterelles didn’t get enough moisture to keep growing.  We worked really hard on August 26th for a chanterelle harvest (picture below) – there were a little dessicated – and that was the end of the season for us. 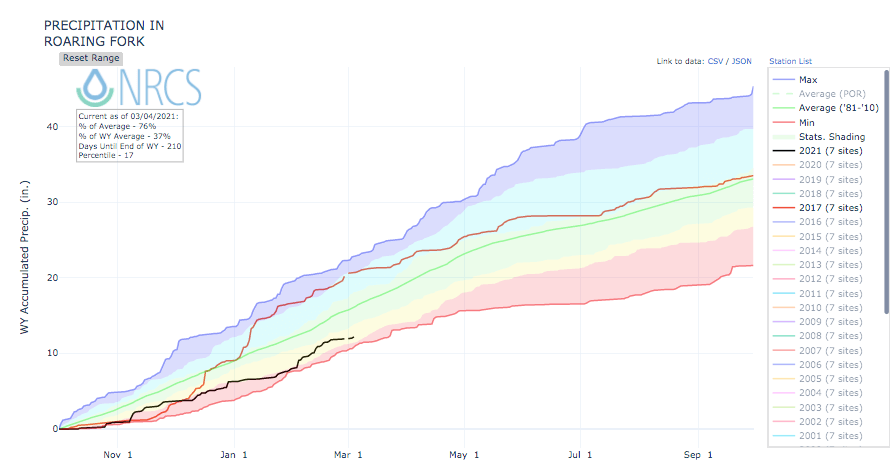 2017 is showing in red in the chart above. We were at the 90th percentile for precipitation until March 1st and from there we went to average by September. We barely squeeked out 10 inches of rain from April through August with several long dry spells. The Monsoons never came.

August 26th – looks good, but 6 people worked hard for this harvest and it was the last one.

2016 was a good year for mushrooms. We harvested the whole season – chanterelles in our local areas went well into September. It was our first year at the Telluride Mushroom Festival – that area picked into mid/late August (this is a different watershed and not pictured below). For us, this was the best mushroom year for the fest in the last five. 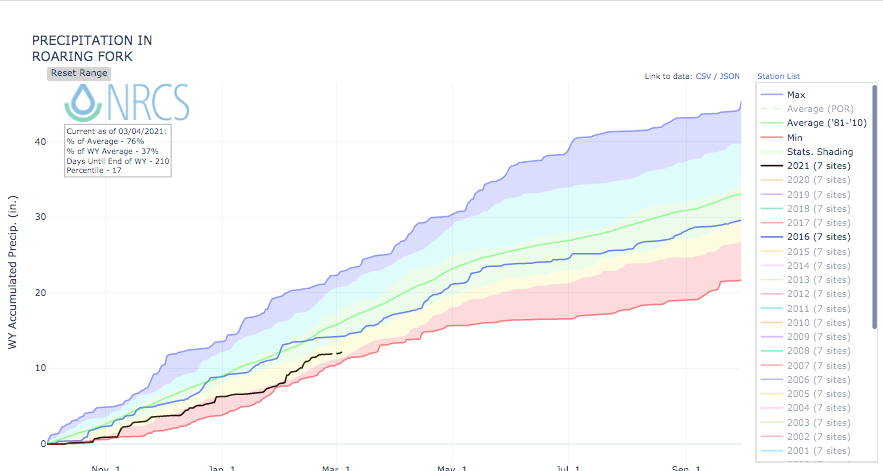 In the rain graph above, 2016 (shown in blue) is lower than average all season, which is interesting. However, from April through August we got 11 inches of rain and it was pretty steady throughout the summer. Enough to provide consistent moisture and a steady supply of mushrooms the whole season.

2015 was an epic year. The season was long and rainy. We were not experienced foragers back then, and at the time we had no idea it was such a boon. We found all the edible mushrooms we wanted that August and September and even coined names for our favorite spots like Mushroomtopia and Chanty Town. 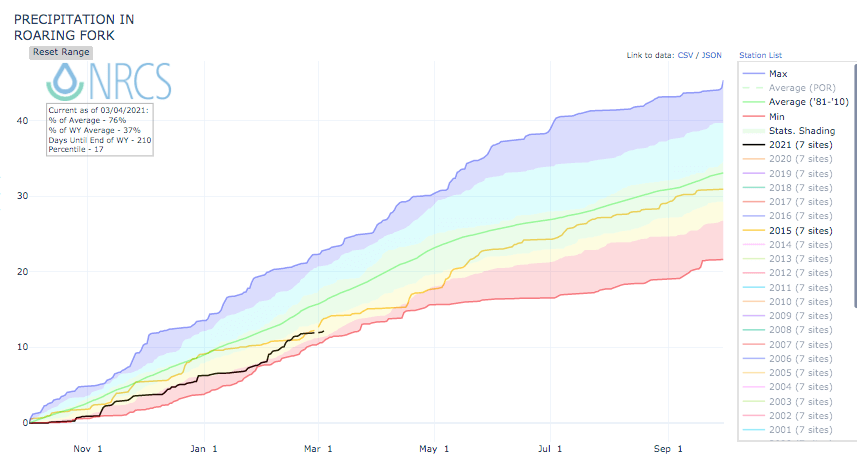 2015 rain is indicated in yellow in the chart above. It was year of glorious monsoons up in the mountains and tons of mud to navigate. Yet, looking at the map, it was a below average snow year. In fact, as of March 1st it is almost exactly the same as this year, 2021 (in black). Big rains came in mid April and 15 inches fell by September. Where we hunted, it seemed like more! Porcini and chanterelles were out early that year, maybe because of the low snowpack? We haven’t seen abundant chanterelles on the first of August since 2015. Curiously, the rain was tough on the porcini – they didn’t thrive once the daily monsoons hit, but many other mushrooms were abundant. Chanterelles everywhere, fields and fields of gold!

2014 was also a good year. That was the first year Kristen and I foraged together in earnest in Colorado and cut our teeth. 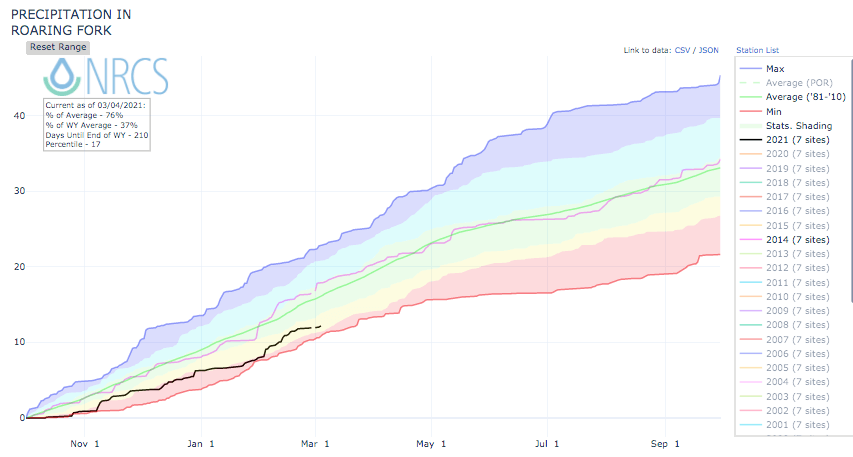 You can see from the map that 2014 (in pink) was truly an average year. In Colorado, mushrooms love average! The details of that year are hazy, but we have photos of great mushroom harvests from mid August to the end of September.

In our limited experience, it seems the moral of this story is that “average is good enough” in Colorado. Consistent rain has proven to be the largest success factor for mushroom growth in the last 7 years. Little snowpack can be rescued by summer rains. And dry spells of three weeks or more can wreak havoc.

All hope is not lost friends! Let’s shoot for a very average year of consistent precipitation and collect baskets of beautiful morels, porcini, matsutake and chanterelles.