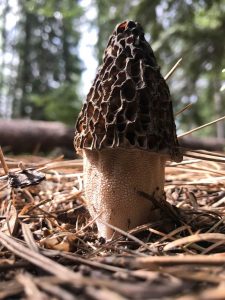 Is that really a burn morel you found? Maybe not! Get comfortable, we are about to geek out a bit on species identification.

Morel hunters in the East and Midwest often have a totally different understanding of a burn morel. For these hunters it is simply a morel that is found somewhere which has burned. Common sense, right? Not so fast…

When we discuss burn morels we don’t mean a morel that is found where it burned. Instead we are specifically referring to a unique species of morels that usually has three characteristics:

Why does it matter?

There are five known species of burn morels. They are unique because they live in the ground in a mycorrhizal relationship with conifer trees and their roots. Although they are always there, they only bloom after a significant fire! These mushrooms might lie in hiding for 50 years, just waiting for a fire to come through. Pretty cool stuff and somewhat of a mystery to science.

The reason it matters to us modern foragers is that these species are specifically responsible for huge and reliable flushes of mushrooms after a burn. We study these five morel species because they produce all the action; they are also reliable and act consistently. If you learn about burn morels and figure out how they work, you can find mushrooms every spring in the West! Not just a few mushrooms – a lot of mushrooms, across nearly every Western state, in the spring and summer. 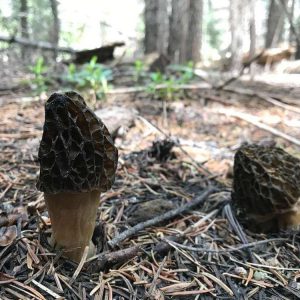 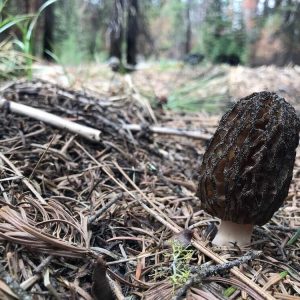 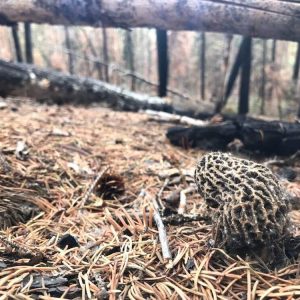 Burn morels are also what commercial hunters target. Sure, some people pick and sell morels in the Midwest. But in the Western fires, commercial hunters pick massive amounts of mushrooms that then get sold around the globe. More morels will come out of an average Western burn than the entire town of Mesick, MI can produce in a season! The quantity and scale of these mushrooms is hard to grasp for most of us.

Want to get started burn morel hunting in the Western states? Check out our e-book and burn maps >

All burn morels are considered “black morels” but they may range from nearly black to grey, greenish, pinkish or yellowish.  Learn more here.

Morchella tomentosa – Dark when young. Often called a gray, fuzzy foot or black foot with hairs/velvet especially around the foot/stem (use a hand lens to see these). These mushrooms frequently have very thick stem wall – a double wall even. They are dense, durable, and weigh more per mushroom. They will typically lighten with age to a light gray or even yellow color. Tomentosas typically fruit later and often signify the last “flush” in a given spot. Located mainly in fir and spruce forests. Read more here. Also, read what Langdon Cook has to say. 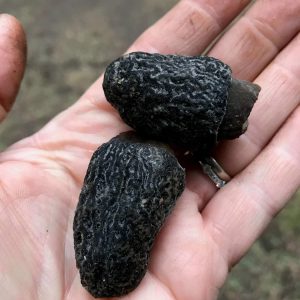 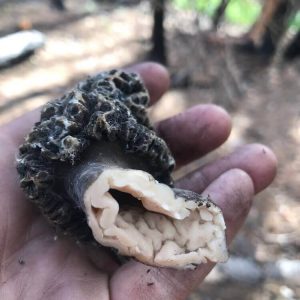 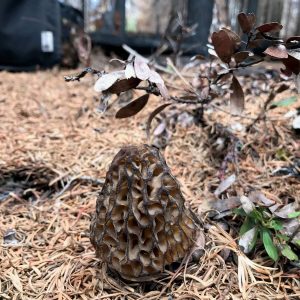 The next four are nearly impossible to tell from each other. Nearly. Impossible.

Morchella sextelata.  Limited to Conifer burn sites in Western North America including douglas fir and ponderosa pine forests. Both sometimes have pink pits and are referred to as as pink morel.

Morchella eximia. (aka M. septimelata, M. anthracophila, M carbonaria) These can have pink pits like the sextelata, but are additionally known to have green pits and to be be called a green morel or pickle.

Morchella exuberans. (aka Morchella capitata) is pretty indistinguishable too. It is also known as a green or pickle morel. Its stem is often chambered which seems to be its distinguishing characteristic. But it has capitate cells on its sterile ridges which makes is identifiable (not entirely sure what this means).

Morchella brunnea.  Thanks to Britain Morin for the lead on this one. This species is not widely acknowledged as a burn morel in online, print or scholarly literature. However, after a search for it over at Mushroom Observer, I am convinced it is the 5th burn morel species.

Wait, wait, there is more. As reported by Fungi Magazine (Volume 11, No 4 Fall 2018) there are  4 documented cases of proper burn morels in the East too:

These four burns had unique species present (apparently in large numbers) that were put through DNA sequencing and found to be Morchella exuberans. It seems that this Eastern version of Morchella exuberans favors pine forests. If you live in the Midwest or East, you may want to pay attention especially to pine forests in your area after forest fires!

We were reminded of this by Mason McDaniel, a forager in Michigan’s UP. He found the awesome specimens shown at right in the 21,000 acre Duck Lake Fire. The fire burned in June of 2012 near the Village of Newberry and attracted pickers the next spring. Mason has found them in other forest fires in Michigan and recommends jack and red pine forests.

If you want to be the one to find the 5th example of M. exuberans in the East, visit the Mycoflora project for ideas on how to contribute as a citizen scientist. 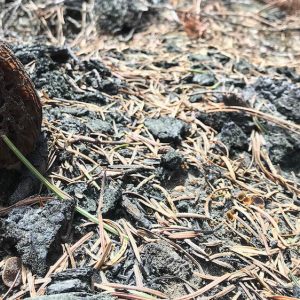 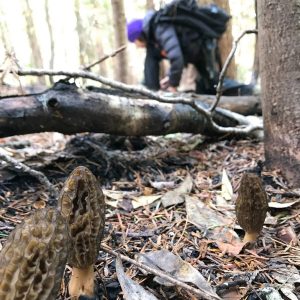 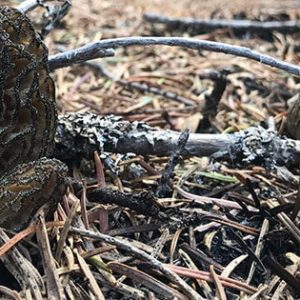 Also, just to be clear, we are not including cultivated morels in this analysis. A growing number of people are cultivating morels (especially in China) from lab-grown genetics.  It is quite interesting. We see them as proof of man’s ingenuity, not that morels don’t need trees to grow. As foragers, we want to focus on where they occur in nature and can be picked.

This article is a bit more academic than our normal posting endeavors, but we wanted to discuss the idea of a “burn morel” and why we believe they are restricted to Western coniferous forests.

Professionals – if you differ with our mycological taxonomy summary above, please recommend an update, change, improvement or correction by leaving us a comment below! Below are the changes we made from some feedback of very knowledgeable people, and, some changes we didn’t make!

These were items suggested by experts that I did not incorporate into an update above. This means that there is only anecdotal evidence or maybe one piece of hard data out there. We are still researching and could revise the article on one of these three themes, if we can find evidence or research:

One interesting issue raised by Bryan Rennick (read comments) and Britain Morin. The burn morel species above have not been proven to be mycorrhizal. There are lots of cool little pieces of evidence that jive with this contention. Scientists are kind of all over the board on this one, but, seem to be wanting to take away our Morel’s beloved mycorrhizal status.

So, while Mother Nature may have a few odd exceptions, they don’t change reality here. As mushroom hunters, we know that morels always grow with their trees. Perhaps “mycorrhizal” is not the most accurate word!  But, until I know of another one that describes the situation, I am going to stick with it.

There is still a lot of mystery, which only makes it more fun.

Want to get started burn morel hunting in the Western states? Check out our e-book and burn maps >

If anyone would like to research these species further, or get more precise information, these resources are interesting:

Fire Morels 2012 – an article by Daniel Winkler. Lots of pics and an interesting read. Recommended

Morchellaceae in the Pacific Northwest does a good quick species breakdown too and explains the history of the taxonomy a bit. (2014)