The Hunt Must Go On

We’ve been dreaming and scheming about chasing burn morels across Arizona, New Mexico, Utah and Colorado all year. With COVID-19 and dry weather across the four states, it wasn’t looking good. As the nation slowly began to open and our antsiness to find fungi grew, we decided to follow the moisture and head to Oregon for a quick trip. A bit later than usual for us but in Oregon the rains had been plentiful and the morels abundant.

The adventure started with 3 days around Crater lake hunting for natural blonde morels and spring porcini. The porcini were plentiful but we were a week late for the natural morels. Instead of chasing morels up to new elevations or locations, we hung around and hunted the spring kings (Boletus rex-veris) for a few days. The harvest was either dehydrated or sautéed and then frozen. I especially enjoy frozen boletes which retain that fresh flavor. Another highlight was hitting a third year burn and scoring a nice bag of burn morels.

While the porcini were plentiful, so were the worms. About 50% of the specimens ended up being buggy. Even though the stems appeared clean as we picked, we found them later in the caps. Time was not a friend – if we didn’t process or cool our harvest immediately the bugs rendered the mushrooms worthless. Cutting the mushrooms fully in half turned out the be the only accurate way to see if they were buggy.

If you are after the spring kings – always have a plan to keep your shrooms cold and get them processed right away!

Post Crater we moved North and East to John Day, Oregon to check out the Cow fire. We were excited to have our friend, Graham Steinruck, pop over from Olympia WA to join us on the hunt. This fire had been producing prodigiously and was virtually a tourist attraction. Despite the popularity we picked it for three cool and rainy days. The forest was flushing mushrooms, albeit slowly in the cool rain, at all elevations. The mushrooms were a bit small but the quality was generally good. It seemed like many pickers had already combed the woods and harvested an epic first flush. Fortunately there were enough left behind for us to wear ourselves out and fill our bags each day.

The 2020 Cow fire was a lesson in timing, something morels deliver on a regular basis! We missed an epic harvest a week earlier and it seemed like another flush was coming after we left. There were flushes going on in other nearby burns as well. Yet, despite the middle timing, it also demonstrates that when a large burn is in the right habitat and the right weather comes, there are plenty of mushrooms for all. Instead of kicking off to a different burn, it was fun to hunt the same area for a few days and watch the mushrooms grow so to speak. 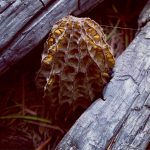 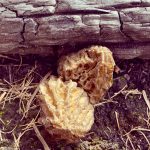 Sadly, after the Cow fire it was time to head home. We did visit a nice burn in McCall Idaho on the way home, but it was snowy, cold and rainy and just not quite the right time for morel hunting.

While shorter than most of our mushroom chasing trips, we were lucky to have been able to get out for the 2020 burn morel hunt during these strange times.

We returned to a very dry Colorado on fire – hoping for some relief for the fires and a change of weather patterns as our mushroom season nears.