Another successful mushrooming trip to the Pacific Northwest has been completed. After leaving May 18th with our truck, camper and electric fat-tire mountain bikes we spent 17 days on the road. Seven days were spent exploring 3 burns in 2 states. Plus, an additional 5 days hunting natural morels and Spring porcinis in Oregon. We spent three days driving and logged 3338 miles over 16 days. Over the span we stayed three nights in RV parks running our dehydrators all night to preserve our harvest. The trip required emergency surgery for our hunting companion, Benzie (the dog) and a 3 night stay in a hotel while he recovered enough for limited action. This was the first year that we truly missed the rain – we had an overnight storm only one day in Idaho. Conditions were hot and dry everywhere. 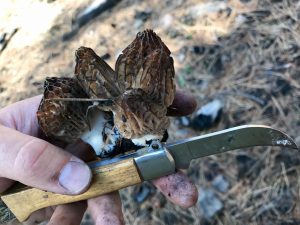 We kicked off our grand tour with three days hunting the Rail Fire in Oregon’s Wallow-Whitman National Forest. We found Morels at the first spot we visited — Kristen found the first ones. It was dry but we found fresh, smallish morels at 4600+ feet in shady riparian areas especially. There were a lot of commercial pickers heading into the higher elevations but we enjoyed hunting within walking distance of camp. 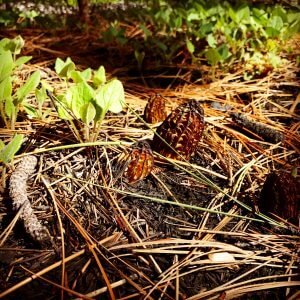 Next up: a day in the Ochoco National Forest at the East Maury fire. We got a smallish basket of morels but had to work pretty hard. It was really dry and we had to focus on finding shadier areas on north facing hills. Most of these morels were found by looking for “seeps” from small natural springs that would run down the hill and create moist habitat. The morels we did find tended to be big and fresh.

This was a smaller burn – about 2.3 square miles – and we didn’t see any other mushroom pickers. If rain had been in the forecast, this would have been a dynamite location! Because it was so dry, East Maury might be a good fire to check on next year. It’s possible that much of the burn didn’t actually fruit this year… which means it may pop next year. 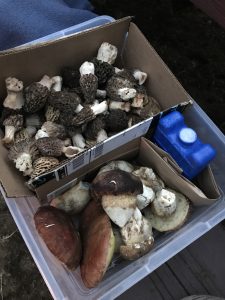 Natural morels and porcinis made the list for the next 4 days. We like to devote some time each year to naturals (non-burn) morels during our burn-trip. We also love hunting, finding and especially eating Porcinis!

We found nice amounts of both yellow morels, black morels and spring porcinis the first day or two at 3100 feet.   We usually focus on areas with grand firs. Morels became scarcer in the hot and dry weather and we had to move up to 4300 feet to keep them on the map. We found black morels in logging cuts & old roads, and some early yellow morels hiding in the the Snowbush in the Green Ridge area. The trip highlight happened when a controlled burn bordered our porcini hunting grounds. We found a bunch of big, bug-free porcinis popping out of the freshly (48-72 hours) charred duff. The shrumps were much easier to spot and it was just surreal picking cinis in a still smoking burn.

While we were eating porcinis, Benzie (the dog) was eating ankle socks. Long-story short, he required emergency bowel-obstruction surgery and spent three nights at the vet clinic. Then we all spent 3 nights in a hotel while our companion continued his recovery. For the last leg of our trip, we kept our high energy friend on a leash at all times and made sure our hunts were short and easy.

We found a few businesses in Sister’s we would recommend:

On the last day of our hotel stay we took an exploratory day trip on Highway 36 running East around Mt. Hood towards Hood River. We parked and did 15 minute hikes in 4 different spots and found a black morel or two in three of the spots and 8 in one of the spots. Per normal, we focused on riparian, north facing territory around 3000 feet. The next day we pulled anchor and drove to Idaho. 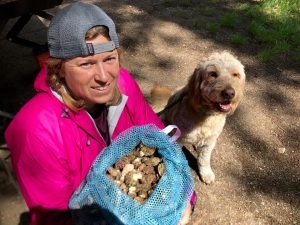 We spent three days in the Pioneer Burn, a HUGE burn in Idaho. It was frustrating because of the strict rules that Boise National Forest had applied to mushroom picking, the difficult access, the unmitigated hot and sunny weather and the lesser quality morels available. Plus, we had limited mobility with our beast on a leash.

The Forest service “designated” only a few areas for personal pickers (and the rest of the burn was off-limits or set aside for commercial picking). Upon closer inspection these areas were very difficult to access and typically NOT in places we wanted to be hunting! One big prime hunting area on the SE side of the burn was entirely cut-off with a road washout and another in the Southern part was behind a closed gate. Normally we would hop on our electric fat-tire mountain bikes and pillage the virgin ground miles down inaccessible roads like these. But with Benzie on a leash and not up to his normal stamina, we had to hunt close to the car.

Despite these few hinderances, we did find morels! They were on SUPER steep north-facing hillsides and gullies between 5100 and 5500 feet. The mushrooms tended to be older with more bugs. The good news: was they were abundant!

This could be a good burn to investigate for the next month if it gets some rain… assuming morels will keep flushing after the dry spell. 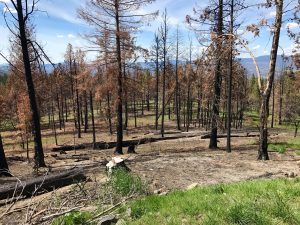 This is the third year we have followed burn morels around the Pacific Northwest. Every year we get different conditions. This year, Oregon had a late spring with tons of snow still hanging around at higher elevations and the mushrooms running a bit late… similar to 2016. 2015 on the other hand seemed to run 2-3 weeks earlier… the mushrooms were at higher elevations! During all three years, the single biggest factor in our mushroom picking success was rain. This year we had 2 weeks of 85-90 degree days and full sunshine, the morels didn’t like it all that much. The spring porcinis however, seemed to be having a banner year.

We came home with five gallons of dried morels and one gallon of dried porcinis. Our dried gallon bags of morels weigh close to one pound and were probably 10 lbs before dehydration. More importantly, we had a great time and learned a lot more about our three main quarry: PNW burn morels, Oregon natural morels and Oregon Spring porcinis.

Already looking forward to next year!